Investors Don't Trust Crypto, But They're Buying It Anyway

So far in 2022, cryptocurrency prices have taken investors on a bumpy ride, hackers have stolen more than a billion dollars worth of crypto since we rang in the new year, and President Joe Biden has stepped up plans to regulate digital currencies.

It’s no shocker, then, that trust in crypto in general fell between January and April this year, according to data released Tuesday by the research firm Morning Consult.

Some coins suffered more of a trust fall than others. Morning Consult reported that among bitcoin, dogecoin and ether, trust in ether — the newest of the bunch, having launched in 2015 — fell the most. Confidence in bitcoin fell the least. (The drop in trust for dogecoin mirrored the same 8-percentage-point drop in trust cryptocurrency saw overall.)

People might not believe in crypto's credibility, but that's not stopping them from investing in it. Despite the steep across-the-board drop in trust, the share of adults who said they’re planning to buy a cryptocurrency within the next month (24%) remained almost unchanged from January (26%). Furthermore, some 21% of respondents who said they’re likely to purchase crypto within the next month explicitly stated that they don’t trust it. 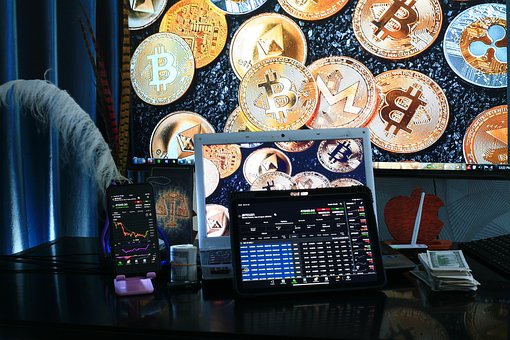 Does crypto even need your trust?

Even with plummeting faith in crypto, the world of digital currency is functioning as intended. Charlotte Principato, a financial services analyst for Morning Consult, wrote in a summary of the findings Tuesday that nobody should be surprised crypto ownership remains steady.

She said that, by design, crypto and the blockchain are sort of “trustless” technologies that don’t operate under a centralized authority — "not in the traditional sense of the word, but trustless in that consumers don’t need to trust it because they can verify ownership and transactions themselves,” Principato added.

Many crypto enthusiasts ascribe to this notion. Exchange platform Coinbase, for example, says that because the technology that underlies crypto transactions encrypts and anonymizes payments while cutting out middlemen like banks, people don't have to trust the recipient — or typical financial institutions at all — for a transaction to safely go through.

Crypto skeptics, however, have chipped away at these assertions. A 2018 study published by a University of Michigan law journal found that, rather than being trustless, crypto requires people to supplant their trust in less-regulated and less-accountable parties. As a result, "everyone is always vulnerable; predators are everywhere, and the slightest mistake is enough to create catastrophe," its author wrote.

Still, to become widely adopted, more people must trust in crypto insofar as they believe it’s a worthwhile investment. As it stands, Morning Consult said 19% of U.S. adults own cryptocurrency. (The White House puts this number around 16%, or approximately 40 million people.)

According to Morning Consult's data, two major barriers are keeping it from wider adoption: No. 1, most people don’t understand crypto, and No. 2, they don’t trust it, either.